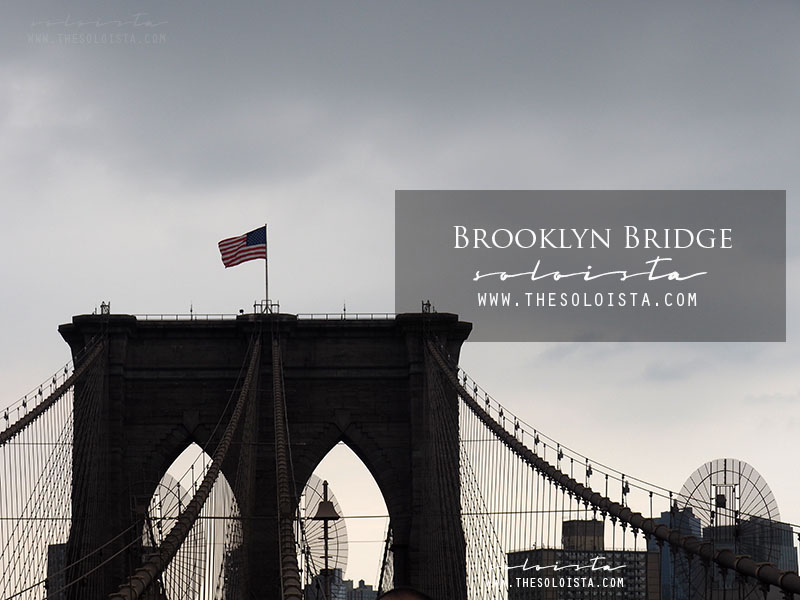 I can’t think of anyone who would miss Brooklyn Bridge whenever they’re in New York. I think it’s customary that before/after you visit DUMBO, Brooklyn Bridge is it’s combo so I made sure to shoot these birds with one stone. (Nah, I hate animal cruelty, really)  These are the photos that I took while I was there.

Walking down the Brooklyn Bridge 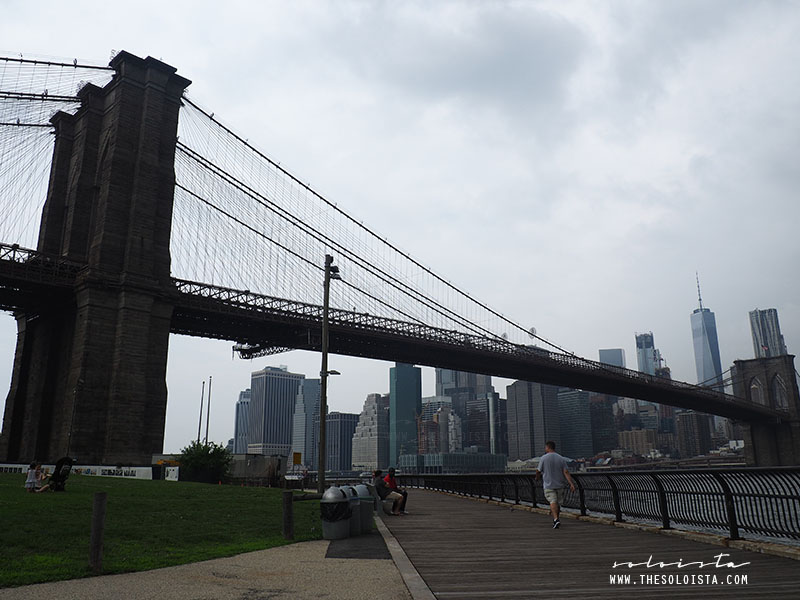 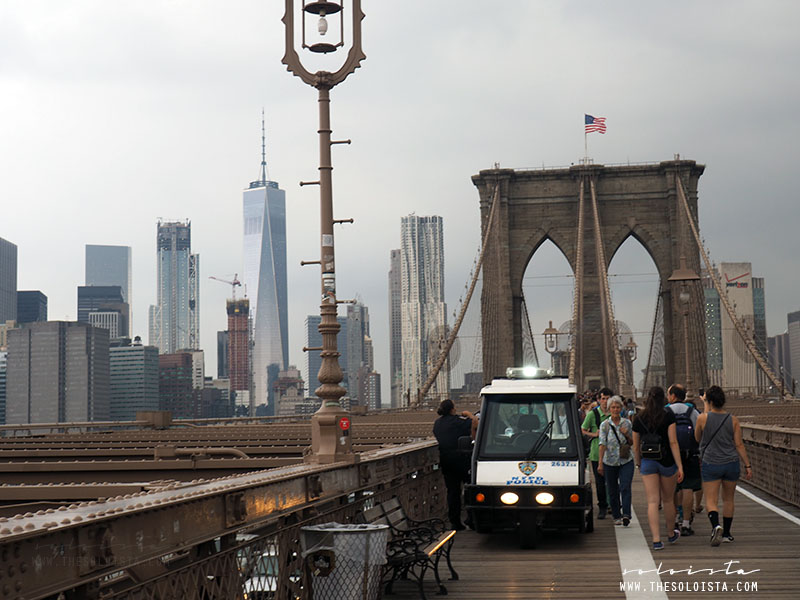 I went there on an afternoon. I bought water on a street vendor before I walk down the 486.3 meters bridge. The view was scenic as expected. You can see the skyline of Manhattan and Brooklyn, as well as the far, far view of Queens and other boroughs. It was fun because there’s a lot of people – tourist – cyclist – runners – cops, and I didn’t noticed how long I’ve been there, maybe 2 hours. 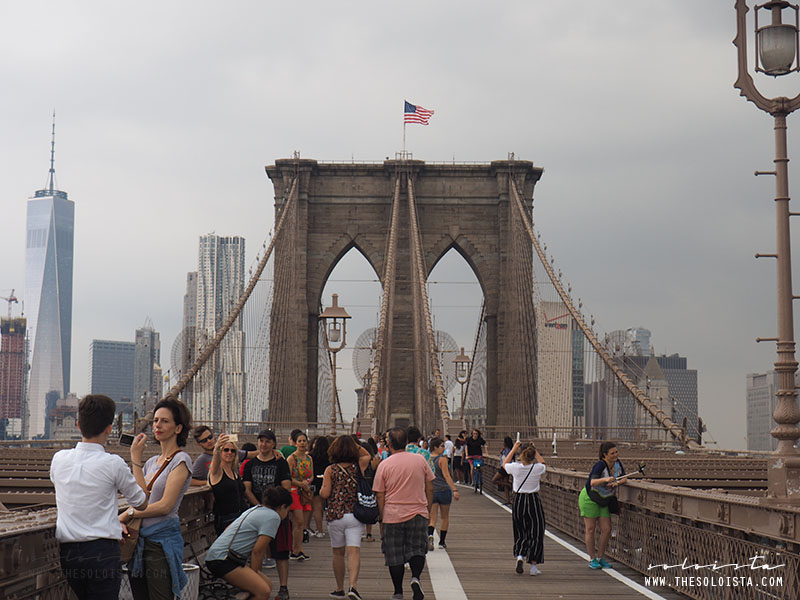 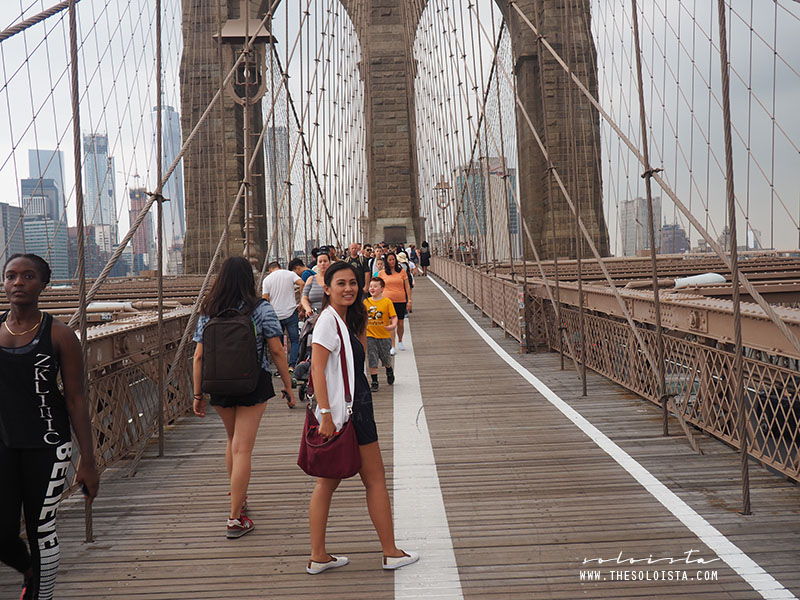 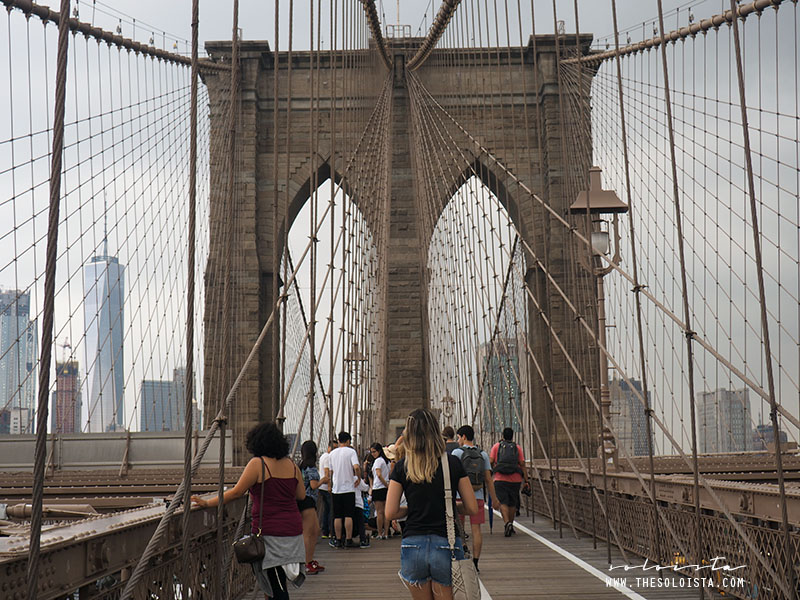 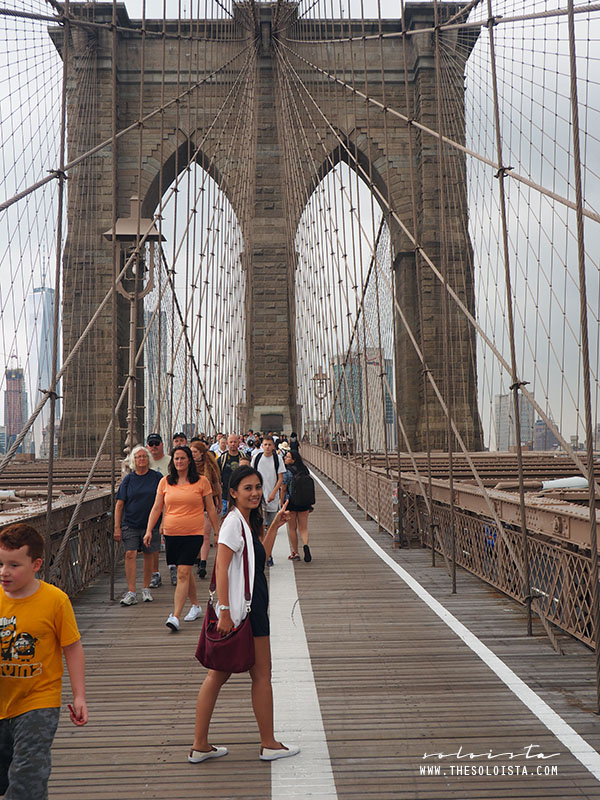 It was hard actually, for a solo tourist like me to capture a view of a hundred feet up high with me on it. Honestly, a selfie is not enough, so I asked somebody to take my picture. He was an old man, but not too old, I mean, it’s better to have somebody than to bother a busy young tourist out there (like I can). The photo may not be as creative as a millennial can do, but my desperation doesn’t allow me to be picky. After all, I came unprepared, I chose to leave my tripod behind, stupid me. 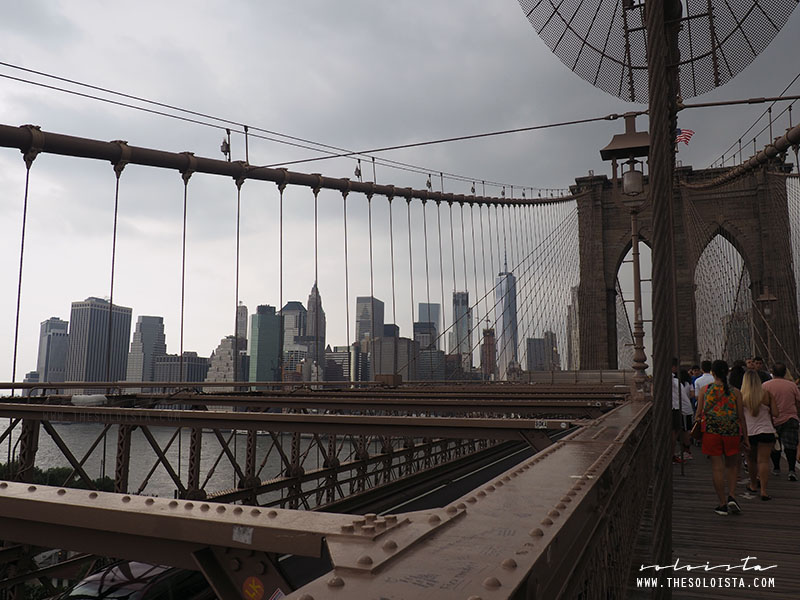 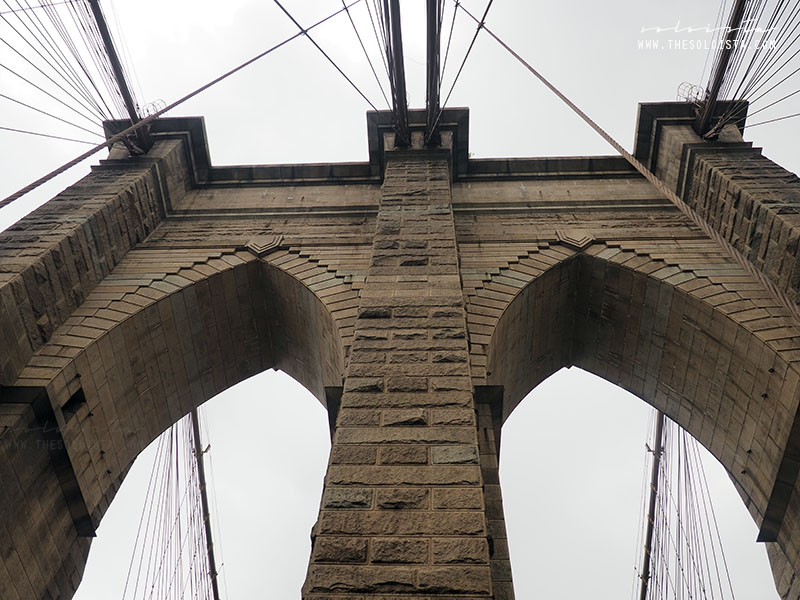 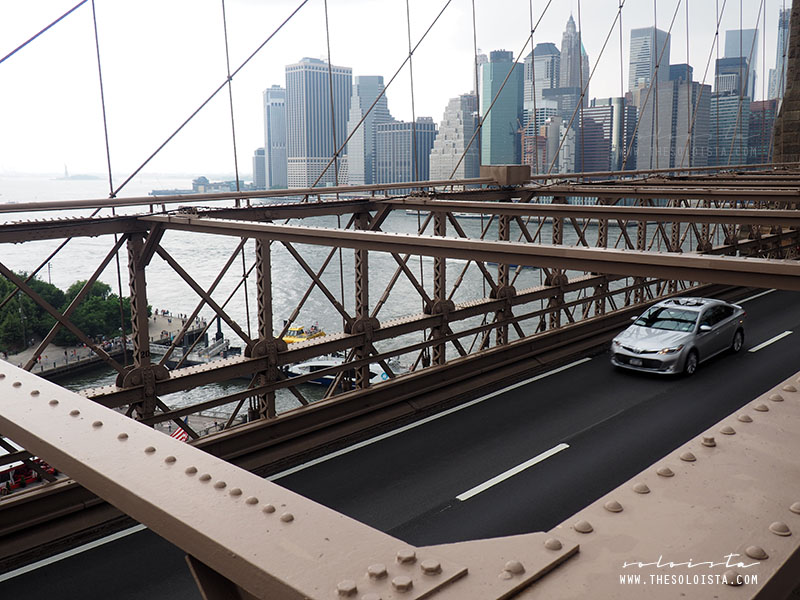 Those tall tower-like arches, it felt endless. Every time I passed through one I thought I’m coming near the end, but I’m not. So most of the time I sit on a bench to rest and just watch people.
There’s a bicycle lane on the bridge, it is shared with the pedestrian. At first I didn’t know as I followed some others, and honestly I didn’t notice the markings on the floor with my eyes fixed straight on the bridge. Thanks to those who shouted at me, I came to know why. 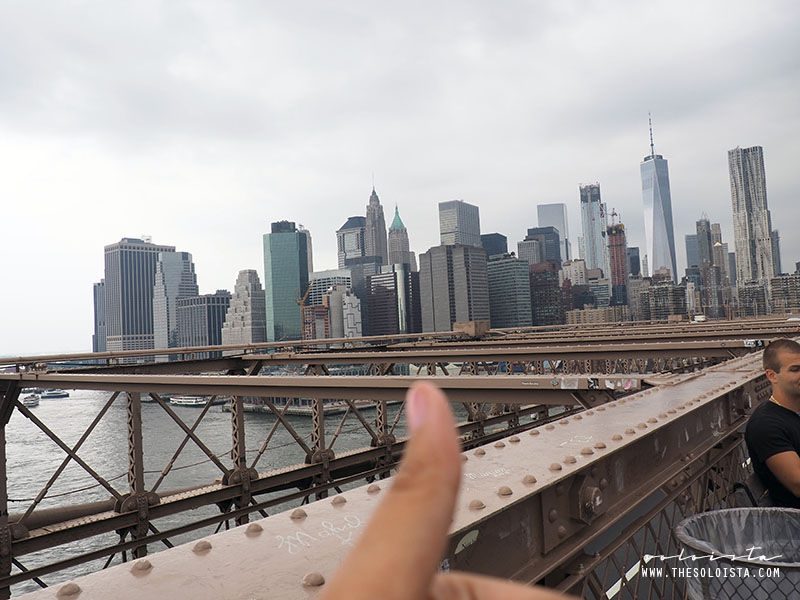 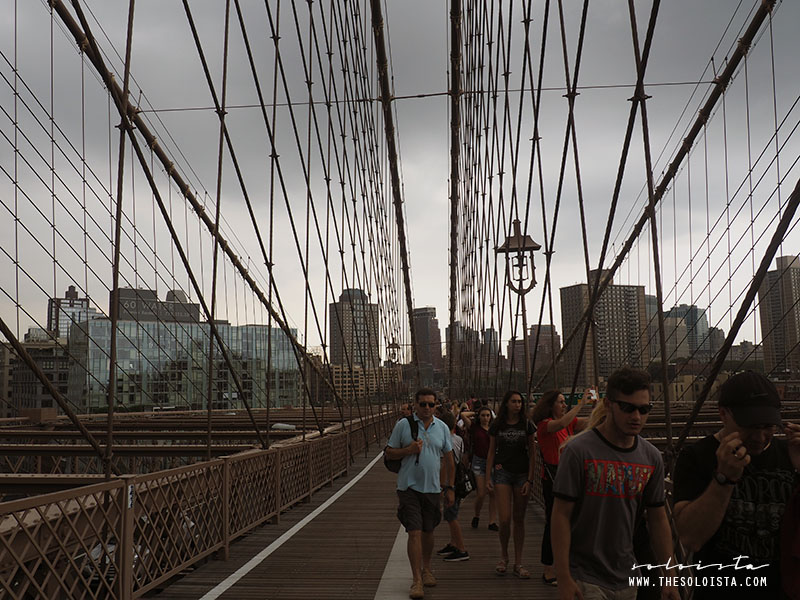 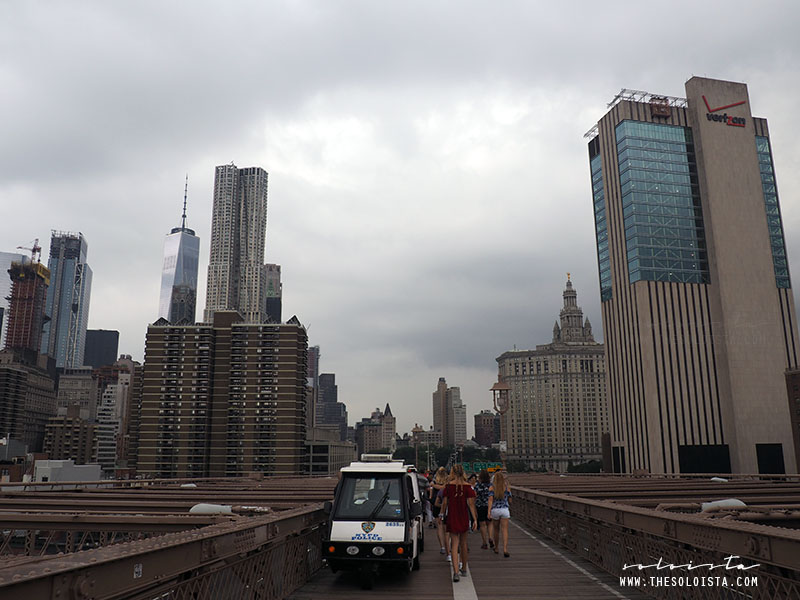 The end of the bridge coming from Brooklyn, is a street bridge market. Most of the items are souvenirs ranging from photos, key chains, post cards etc. etc. I spent some time to buy something. Then it was a goodbye to the Brooklyn Bridge.
I had some quality me-time, even if it’s just walking. It was tiring, really, but with enough rest-stops, I was able to finish it. If given a chance, I will visit Brooklyn Bridge again, but maybe on wheels or through an ambitious run, which is honestly, not so me. :p
Note: This is a latepost. This trip was last July 2017.

The Met and Central Park