When I started hiking, I got so addicted that I even wanted to hike every week or at least do it regularly. I became so enthusiastic about hiking every mountain, may it be popular or not, easy or not, and for some reason, I don’t know if this also happens to other hikers, I don’t feel fulfilled or certified if I haven’t had a major climb. Hahaha That’s what I felt until I hiked Mt. Cinco Picos.
It was my fifth mountain and I got excited for a major climb that will start at 3AM (my first time). The most exciting part is Silanguin Cove that will greet us at the end of the experience. Traverse meets cove! Exciting!

We depart at 12 midnight from Victory Liner, Pasay beside Gran Prix Hotel. It will be a 4 hours ride going to Olongapo. When we reached Olongapo, we rented a jeepney that is pre-arranged to take us to the jump off. That’s another 1.5 hrs, and I’m partly weak due to lack of sleep.
Jump-off is at Sitio Calawag, and after settlements and other stuff, we went on with our midnight hike!
No pictures, of course, sobrang dilim baka kung ano pa makuhaan namin.
I thought hiking in the dark is scary and dangerous. Yes it is a bit dangerous, but it’s not actually scary! It is because if you don’t want to get left behind, you won’t have time to point the flashlight anywhere else on a dark mountain, under the moonlight. 😛
We reached a river at 5 AM and this is where we had breakfast. It is just a quick break in fear of the sun. After this we went straight to Peak 1.
We were so tired to walk without long breaks and I’m sleepy to be hiking at that moment, but I was awakened by the beautiful sun peeking on the curves of the mountain with the tall grassland as another audience. This is a view which is so different when you see personally.

Reaching Peak 1 is an accomplishment already. The view is already great with Mt. Balingkilat and Silanguin Cove available in the background. But since it is 10 AM already, the sun is up and emitting powers. We had a quick picture taking then we went down to a shaded part OR a small kubo to have lunch. The kubo is for the hikers who needs a place to stay as Mt. Cinco Picos is an almost bald mountain that time.
We took a nap for a few minutes and after that, we were set to hike Peak 2 and 3. Some of us went down to Silanguin Cove while four of us proceed to the peaks, andun na e, sayang ang chance. We left our bags under a tree, and we asked one of the guides to watch for it. We’re with an experience hiker that’s why we’re confident to hike the remaining peaks without the guide. So there! On to Peak 2. 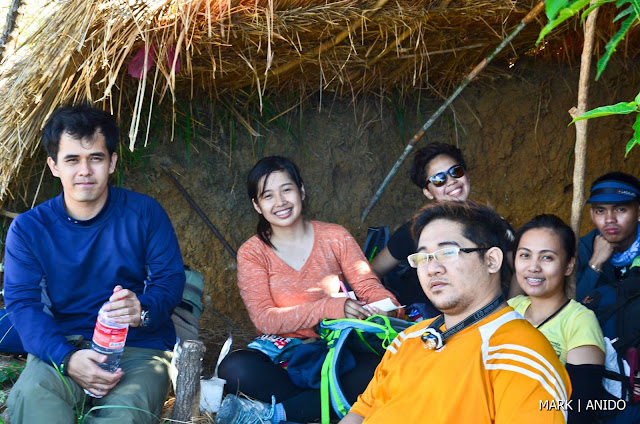 View from Peak 2
After an hour of trekking mostly dry and shaded trail, we saw Peak 2 with a big rock. Since it is higher, the view has big coverage and a community (or factory) can now be seen.
Before moving on to the last peak, we rest for some time on a small nook, cool and shaded near Peak 2. The trees covered the area which makes it easier for us to lie down and chill. The sound of the wind brushing inside also gave a sense of peacefulness. Parang huni ng mga ibon sa bakuran. This place is also perfect for camping.

When we’re ready to brave the last peak, we trek again for another hour and the trail is more breezy, mostly dry and shaded. But reaching a dead end, and in front of us a steep and sandy mountain without plants to hang on, we knew it will be a challenge for the third peak. Now only three of us proceed to the top and I really wouldn’t be able to do it without the help of another. I held his hands and let him pull me while continuously ascending on an almost 40 degrees mountain. Reaching the top, and now with something to grab on is a miracle for me! That thing’s really scary! I almost slide to bottom when we descended. 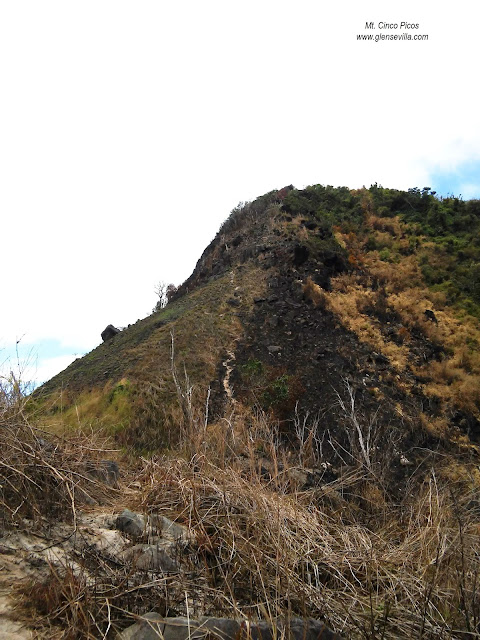 Are you ready for Peak 3?
Now, Peak 3. The ever beautiful and scary Peak 3. It’s a 360 degrees view on top. Watching the heights of Peak 4 & 5, checking out the nearby mountains and sea, seeing the community down there that fits in your palm (not sure if it’s a factory or what). I’m proud to have stayed and move on with hiking! I love that I’m here even if the wind almost blew me out, I hang on to the rocks, crouched  and crawled just to make my way to the spot – photo op it is! 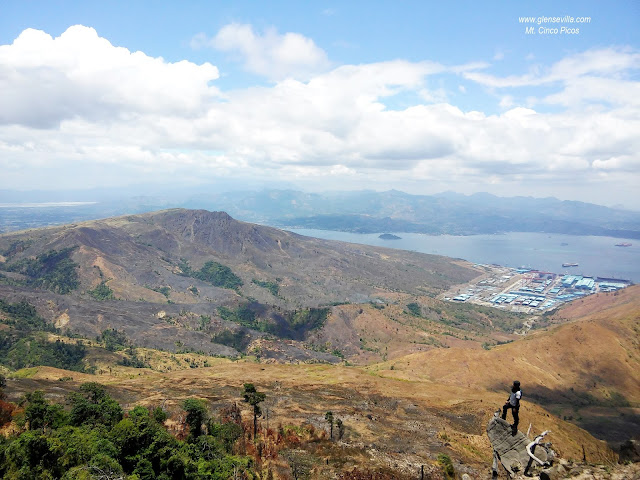 Peak 3
Moving on, going down the trail to Silanguin Cove is another 4 hours of trekking on a dry, rocky, coral-ish area. It’s like the whole mountain was dried up like that and it’s really making it hard for my toes. It seems like the area was covered with water before, and it dried up like this. When we reached the water source, we slept again on those big boulders of rock. Hahaha! Di naman halatang pagod kame, tulog ng tulog kahit saan.

We passed by a long stretch of river beds and entered a talahiban field. It’s easy to get lost in here because it’s almost the same view everywhere. I’m almost losing oxygen (chos!) when we reached the back of the beach, it’s an awakening moment, andyan na ang beach! (There’s the beach) We were bathing in sweat and paika-ika na when we saw the others preparing for dinner, sleeping or swimming. If they only knew what we went through!
Ayan na ang beach!
We finished off the day over some drinks and that night, we had the beach all by ourselves. Yes! Also take note, Silanguin Cove is a secluded beach and not easy to get crowded. It will take hours from Pundaquit if a tourist wants to visit this place. So this is what we called, a beautiful reward after traversing. Isn’t it? We played games the next morning and we visited Capones Island. You know the drill.
After this hike, I knew that it’s not because of the complexity of a mountain that makes me happy and fulfilled. It is through experience, the spectacular view, not only by the overlooking sea but the serenity of sunsets, the curved grassland and the harmony of plants (yes! harmony!) and of course the person you are hiking with, that makes the experience memorable and worth it!
I’m looking forward to hiking Mt. Cinco Picos again in the future, but maybe if I lose some weight.
Here’s a video clip of the trip, still c/o Mark Anido – Thanks Mark for the nice shots!
Tags: Asia, Hiking, Philippines, Zambales

My First Diving Experience in Coron

Hey there! You're reading The Soloista Blog where I post my solo travel stories and whatnot.
New here? Start here.